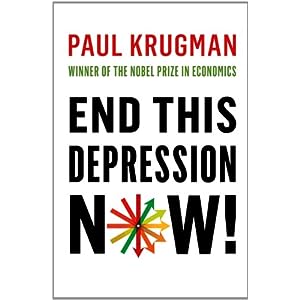 Paul Krugman is a keynesian economist. He thinks the recipes for ending the current economic crisis are more stimulus (expansive fiscal policy), more money printing by central banks and, especially for countries where the housing market has crashed, mortgage relief programs. He does not believe that austerity measures are doing any good to the economy. On the contrary, he believes, the Austerians (the supporters of austerity measures) try to apply moral values to economic problems (for example reproaching certain countries for having overspent in the past few years or some families for having taking up excessive debt in the conviction that housing prices could only go up). This argument is not convincing. In fact, what the author fails to see is that it is not about morals, but about not building expectations that profligate countries, corporations or individuals will be bailed out at some stage. If such expectation was created, the economy would risk continuously heating up and irresponsible behaviors would be encouraged. Also, the author's argument that, contrary to the current mainstream opinions, debt can actually be cured with more debt is unconvincing. In fact, where is the limit? Can the debt be reduced by way of increasing inflation? Hmm, I am not convinced: even if I do agree with Krugman that a Republic of Weimar-type situation is unlikely, I am old enough to remember the inflation we experienced in Italy only a few decades ago, and that was not nice either. Finally, the author's take on the Euro is, unfortunately, quite accurate. The Euro area economies are too different for a single currency to be adopted, and workers' mobility too reduced. On the whole a well written book. Worth reading.