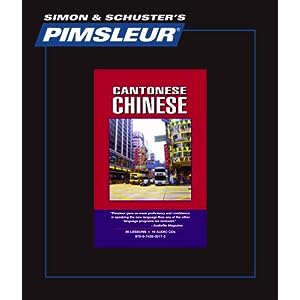 If you want to learn Chinese, forget writing. That is a totally separate slow, tedious process that may or may not reward you depending on your diligence. To learn to speak such a language as Cantonese you really have to focus a lot on listening and mimicing native pronunciation. I know this because I already had basic speaking ability of Cantonese having grown up in Australia to Chinese parents. Changing the tone of a word slightly can effect the meaning entirely so it is really good to listen to the Pimsleur CDs to check my own pronunciation and knowledge. Even though I knew alot of the stuff on most of the CDs, I felt that my fluency improved a great deal and I was able to build up my vocabulary. After each CD you can really feel slight progress, especially if you take some time between dialogues and substitute the words on the CDs for different ones. Maybe from a dictionary or something.

These CDs are really great for learning Cantonese but I really think they are too expensive. I would buy all the sets plus other languages if they were cheaper. Oh well, gotta keep saving! It would also help to have some easy vocabulary printed in Chinese characters to help visual recognition in case you need it when you travel. There is a vocabulary list for the Spanish CDs so I don't know why they haven't included one for these CDs.

I would really recommend this package to anyone wanting to learn the Chinese languages and to people like myself who speak Chinese at home but have low confidence in speaking to others in public. It has really boosted my confidence and I can't wait until the next time I go to Hong Kong and road test my communication abilities!!


I've found the CDs a great help to my Cantonese. I am an expat living in HK for three years and have recently got engaged to my Chinese girlfriend.
My cantonese is 'so-so' but I really wanted to have a good go at becoming fluent (and to increase my confidence). My fiance is impressed with the tones and the repitition but occasionally she'll say, " actually, use this instead. Noone says that anymore".
I know that it's only small things and if your an overseas Chinese then you might not notice these differences in the language (in HK that is, I've got no experience elsewhere).
So although I like the CD's and they are obviously very benificial, I am also lucky to have someone here to correct the errors. Maybe it just needs updating but a great start.

Like Dennie in NY, I am also a native Cantonese speaker - born and raised in Hong Kong. My caucasian wife purchased this system about a month ago and it has worked wonderfully for her. I have listened in on the CDs and have offered help from time to time. The system does what it is designed to do and NONE of the pronounciations are wrong. Some of the lessons and phrases are purposefully simplified for the beginners. The idea here is to equip the student with some basic conversation skills and not turn them into a native speaker. Cantonese is a VERY difficult language. It has more exceptions than rules. There are multiple ways of saying the same thing. The Pimsleur system is well thought out and breaks it down so that leaning is fun and possible.