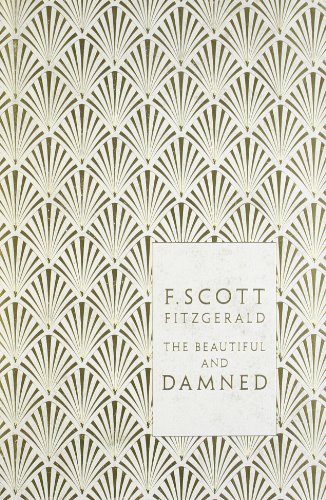 "It is seven thirty on an August evening. The windows in the living room of the gray house are wide open patiently exchanging the tainted inner atmosphere of liquor and smoke for the fresh drowsiness of the late hot dusk. There are dying flower scents upon the air, so thin, so fragile, as to hint already of a summer laid away in time."

This is the story of a young couple Anthony and Gloria Patch living out their days to the hilt in New York City as they await the death of Anthony's grandfather, Adam Patch from whom they expect to inherit his massive fortune.

Gloria is a spoilt child from Kansas City turned into a sophisticated and most beautiful woman. Gloria does not intend to lift a finger to do any domestic work in the home, no matter how slight; while Anthony who considers himself an aesthete, finds it quite hard to get his act together and instead of buckling down to some work, prefers instead to hang with his wife and their friends on nightly binges. They drink and eat in the classiest restaurants and hotels, rent the most expensive apartments, travel out to the West in the spring time driving plush cars, wearing top-of-the-line clothing and just generally living it up high on the hog, as they wait.

Meet Maury Noble who is Anthony best friend who spends his time between New York and Philadelphia; Richard Caramel who has just completed writing a book and looking for new ideas for a second one. Joseph Bloeckman from Munich who started out small in America and is now a big shot in Show Biz. Also the quiet Jewess Rachael Barnes and Muriel Kane who is young, flirtatious and sometimes a bit too talkative and Tana the Japanese housekeeper of the Patches.

We are shown the Patches at their very best as the novel starts, with the world at their feet and loaded with cash with which they make very expensive choices. But, as we get further in, we see things begin to change gradually and we realize that those very choices will be their very downfall. It was quite a good read but it could be very heartbreaking at times as we put ourselves into the shoes of the main characters. All lovers of F. Scott Fitzgerald should read this book if you haven't done so already, and those of you who like reading about the ultra rich in the Roaring Twenties this one is for you. It is the kind of book that you feel you will want to read again. It is that good and I shall miss it.