" The Importance of Being Earnest" by Oscar Wilde 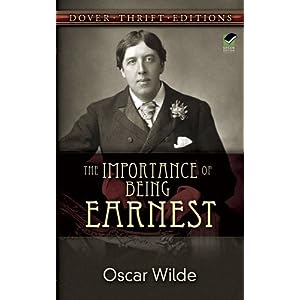 " The Importance of Being Earnest: A Trivial Comedy for Serious People" is one of the first plays written in English since the works of Shakespeare that celebrates the language itself. Oscar Wilde's comedy has one advantage over the classic comedies of the Bard in that "The Importance of Being Earnest" is as funny today as it was when it was first performed at the St. Jame's Theater in London on February 14, 1895. After all, enjoying Shakespeare requires checking the bottom for footnotes explaining the meaning of those dozens of words that Shakespeare makes up in any one of his plays. But Wilde's brilliant wit, his humor and social satire, remain intact even though he was a writer of the Victorian era.

Wilde believed in art for art's own sake, which explains why he emphasized beauty while his contemporaries were dealing with the problems of industrial England. "The Importance of Being Earnest" is set among the upper class, making fun of their excesses and absurdities while imbuing them with witty banter providing a constant stream of epigrams. The play's situation is simple in its unraveling complexity. Algernon Moncrieff is an upper-class English bachelor who is visited by his friend Jack Worthing, who is known as "Ernest." Jack has come to town to propose to Gwendolen Fairfax, the daugher of the imposing Lady Bracknell and Algy's first cousin. Jack has a ward named Cecily who lives in the country while Algernon has an imaginary friend named "Bunbury" whom he uses as an excuse to get out of social engagements.

Jack proposes to Gwendolen but has two problems. First, Gwendolen is wiling to agree because his name is Ernest, a name that "seems to inspire absolute confidence," but which, of course, is not his true Christian name. Second, Lady Bracknell objects to Jack as a suitor when she learns he was abandoned by his parents and found in a handbag in Victoria Station by Mr. Thomas Cardew. Meanwhile, Algernon heads off to the country to check out Cecily, to whom he introduces himself as being her guardian Jack's brother Ernest. This meets with Ceclily's approval because in her diary she has been writing about her engagement to a man named Ernest. Then things get really interesting.

Wilde proves once and for all time that the pun can indeed be elevated to a high art form. Throughout the entire play we have the double meaning of the word "earnest," almost to the level of a conceit, since many of the play's twists and turns deal with the efforts of Jack and Algernon to be "Ernest," by lying, only to discover that circumstances makes honest men of them in the end (and of the women for that matter as well). There is every reason to believe that Wilde was making a point about earnestness being a key ideal of Victorian culture and one worthy of being thoroughly and completely mocked. Granted, some of the puns are really bad, and the discussion of "Bunburying" is so bad it is stands alone in that regard, but there is a sense in which the bad ones only make the good ones so glorious and emphasize that Wilde is at his best while playing games with the English language.

But if Wilde's puns are the low road then his epigrams represent the heights of his genius, especially when they are used by the characters in an ironic vein (e.g., "It is very romantic to be in love. But there is nothing romantic about a definite proposal" and "I do not approve of anything that tampers with natural ignorance"). Jack is the male lead, but it is Algernon who represents the ideal Wilde character, who insists he is a rebel speaking out against the institutions of society, such as marriage, but with attacks that are so flamboyant and humorous that the cleverness of the humor ends up standing apart from the inherent point.

In the end, "The Importance of Being Earnest" is the wittiest play every written, in English or any other language, and I doubt that anything written in the future will come close. Wilde was essentially a stand-up comedian who managed to create a narrative in which he could get off dozens of classic one-liners given a high-class sheen by being labeled epigrams. Like a comedian he touches on several topics, from the aristocracy, marriage, and the literary world to English manners, women, love, religion, and anything else that came to his fertile mind. But because it is done with such a lighthearted tone that the barbs remain as timely today as they were at the end of the 19th-century and "The Importance of Being Earnest" will always be at the forefront of the plays of that time which will continue to be produced.